Ultrasound is an excellent way to evaluate breast abnormalities detected by mammography. In some cases it is not possible to tell from the imaging studies alone whether a growth is benign or cancerous. That is why ultrasound-guided breast biopsy is so effective. It is a highly accurate way to evaluate suspicious masses within the breast that are visible on ultrasound, whether or not they can be felt on breast self-examination or clinical examination. The procedure prevents the need to remove tissue surgically, and also eliminates the radiation exposure that comes from using x-rays to locate a mass.

Ultrasound-guided biopsy is most useful when there are suspicious changes on the mammogram that can also be seen on an ultrasound exam. After placing an ultrasound probe over the area of concern and after using local anesthesia, a very small nick is made in the skin at the site where the biopsy needle is  inserted. Then the radiologist guides a biopsy needle directly into the mass.

The radiologist, constantly monitoring the lesion site with the ultrasound probe, guides a biopsy needle or the vacuum assisted needle directly into the mass and obtains specimens. Usually at least three to five samples are taken using the core biopsy method.

If you are taking aspirin or a blood thinner, your physician will advise you to stop these medications five days before the procedure.

Regular medications should be taken as prescribed by physician. A comfortable two-piece garment should be worn. Please avoid using talcum powder or deodorant on the day of your biopsy.

You will be awake during your biopsy, and should have little or no discomfort. Generally the biopsy is completed in less than an hour. It is not necessary to close the tiny skin incision with sutures; a small compression dressing will do. Most patients are able to resume their usual activities later the same day.

A pathologist will examine the tissue specimens after they are processed. A definite diagnosis will be available within a few days. When the final biopsy findings are available, you may have a session with your physician to discuss the results and decide together on the next step. If cancer is diagnosed, you probably will be referred to a tumor specialist or surgeon. 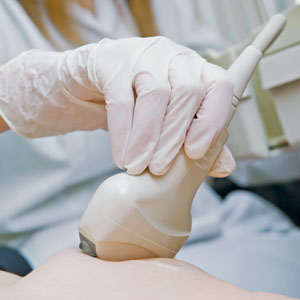